Pouring your muesli helps assuage my guilt
while you get dressed to catch the twelve past eight
knowing I’ll take my tea back to our quilt
still warm, to read . I stay pyjamad til quite late
these days. Last week’s storms have stripped the trees.
It’s winter. Easy to find excuses not to swim.
We don’t need Google to tell us it will freeze
again tonight. Easier to sink another evening in.
So life winds down in loose, uneasy patterns,
we sort of rationalise our letting go of dreams.
Skin’s surface like the stems of green things slacken
but affection does a better job than creams;
while the habit of acceptance makes failing
memories, eyesight, backs, plainish sailing.

Desert trade
Even the sky
is dust. Walls and streets
bleached mud: all shades of beige.
He seats himself before us,
a pool of blues, unwinds
a river of indigo from his face,
which shines like oil,
purple with dye that’s bled.
Long, tapered fingers flash
their rings as he unpacks
treasure from crumpled calico:
amber, hammered silver,
polished camel teeth.
The bargain made, we pay.
He stays. Expectant.
The ceremony of trade
is incomplete. I grope
around for gifts. Find soap,
in hotel wrappers.
His sneer
reveals gold teeth. ‘Tuareg women
don’t use soap. Just oil.’
A gleaming finger pokes
my flesh, its shades of beige.
As if its pigment had been lost
by washing.
Cora Greenhill
Published in The New Writer, Summer 2011,
www.thenewwriter.com
and The Best of Manchester Poets 2, (Puppywolf) 2011
www.puppywolf.co.uk


Nil by Mouth, week 3
Still no swallow, so we’d brought things to smell:
lavender was in bloom and I’d plucked rosemary
trudging the dual carriageway from Silver Street.
Tessa brought various kinds of mint
from her Berkshire garden. You grunted
what we took to be approval. Encouraged,
I’d brought essential oils today. You had me repeat
their names: chamomile, geranium, frankincense,
rose. You nostrils quivered at each sniff.
Then from the twilit depths of your confusion,
as if the oils had cleared some mental passageways
like menthol for the mind, with just a whiff
of a smile, you announced your plan.
‘You can leave the bottles in the drawer,
and we can have some more tomorrow,
instead of listening to music. One is familiar
with the music, you know. But one isn’t
familiar with this. It’s very … interesting.’
Along the dual carriageway I walk on air,
become familiar with this ballooning
happiness, held on a rope of grief.
Cora Greenhill
Published in Antiphon, 2011
Antiphon.org.uk


Night scent of late jasmine:
the flower Greeks gave
to departing guests,
like blown kisses
reaching only air.
And I see you still
in that seagreen quilt,
shrunken like these almonds,
blackened on the tree in winter.
A white silence
of owlglide
full
of its own perfection
drops
all of it
flight-feathers flared,
talons down-stretched
onto the top branch
of the pomegranate tree.
Closing its cape around its shoulders,
it settles to watch me, a stranger
cloaked in her losses.
A spindle of silence whorls me.
As if this weren’t enough,
its lift-off swoops so near me
I am caught in the updraft
vacuumed, undressed,
sucked clean enough to see
you, my mother, who hunted
like an owl
pouncing on revelation


I bought the little shrub for its coconut
scented leaves and tiny vanilla flowers
for the pot by the back door.
And then I remembered the tree
at Moni Paliani: higher than the church,
and the convent grown around it.
The cobwebs in the canopy are thick
as hide with dust. There is no space
in matted branches where birds,
snakes, hedgehogs, lizards, bats and rats
have built and left their nests.
It is suffocating in there, dry
as birdbones, snail shells, beetle
carapaces, vacated snake skins.
Burdens of prayers, both appeals
and gratitude, clutter its lower storeys:
crutches, corsets, frames.
And human hands and feet,
eyes and hearts, on cheap tin plaques.
And the icon, just wedged in there
among the debris, had been stolen
but always returned.
A lamp burned
perpetually beside Her.
Agia Myrtia. Holy Myrtle.
Container not contained. 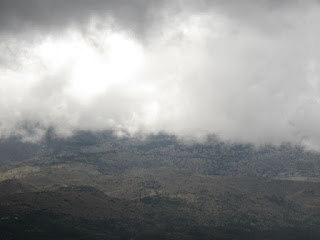 The boot’s full of bulging sacks, heavy as corpses.
Free firewood. After lugging them in, trundle off
down Malaxa mountain. A scatter of goat turds
on the road glow like dark chocolates: free compost.


Better than horse manure for potassium,
Giorgos told me, after I’d spread
Leo’s stable muck around the orange trees
banking on getting a better crop next winter.

I flick turds into a sack with a piece of the wood,
loose patience, lift them by hand. Forgot the trowel
I used yesterday to edge out crowded century plants.
Century plants flower in ten years, not a hundred,

Giorgos said. But either way I’ll quite likely be dead.
Someone will see them, I say to the road ahead. 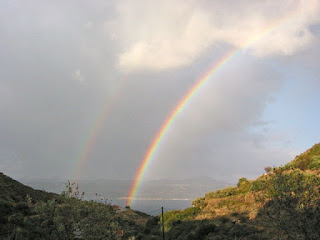 Hungry, I hit the coast at Kalives. Smell out
souvlaki joint, still open in winter. Carry
pita gyros to the beach, a nice weight
in the hand, reminiscent of something.
Watch a tumescent rainbow prod donkey dark
cloud from a steel horizon on slate-black sea.
I want my hair to be these glorious, grisly greys,
to shine darkly, as my feet sink in clay,
like today. I want my food to be this good
when I’m this hungry. I grow more beastly
as I get older. Hands, clumsy on keyboards now,
reach for real tools: machete, pick axe, trowel.

I loose my watch, forget my phone. Alone,
warming my bum at the stove, I’m home.

Ganesh stands on our windowsill,
silver-etched with signs, sparkling
with elephant aura.
It was he who carried me,
when I journeyed shamanically,
ears tyrannosaurus butterflies.
One rush hour on The Underground
last year, foetal elephants swam
all filmy pink on everyone’s front page.
Our communal unconscious
held its breath. Trains floated
in unspoken tenderness.
I felt that sway again, under straddled
thighs, the shudder and steady
as the path tipped slippery to the river.
Alarm at a trunk raised trumpeting
wild relatives, gathered like shadows
among the baobabs, watching
the tame orphans we were riding.
Remembered, too, old eyes, dwarfed
by the crackled expanse of cranium,
hold mine, as the baby’s trunk,
thicker than an arm, wetlipped
peanuts from my tingling palm.
Another day, a herd straddled
nonchalant around our open jeep,
not caring to change their route
at our incursion. A nudge would topple
us, but they flowed gravely by:
a river of elephantkind.
Fourth Floor, Harvey Nichols:
a waste of silks and sushi. Handbags
of snakeskin, crocodile. Afternoon teas.
Mesmerised, we drift the aisles.
Discreet designer label on a grey hide
jacket reads – I put my glasses on – elefant.


We can see them all


over Blacka Moor, near Sheffield:


stonechat, linnet, sparrowhawk,
wheatear and woodcock.
though we may not know them
In marshes near Redcar
wade gadwall and pochard.
nor who on earth named them
On Redesdale
marlin and peregrine fly
and dippers dive.
though no one’s  watching
They’re still on the wing
near Kirkby Stephen:
the Northern Brown Argos
(whose egg is laid on the upper side
of the young leaf of the Rock Rose )
and the Green Fritillary
(whose caterpillar feeds on Dog Violet).
will their names outlive them?
Somewhere near Weston, the orchids
- Green Winged, or Early Purple,
followed by Autumn Lady’s Tresses -
are visited by the Grizzled Skipper
and Grayling.


or will they fly on,

Cora Greenhill
Published in ARTEMISpoetry, 2011 www.secondlightlive.co.uk
Posted by Cora Greenhill at 8:31 AM No comments: