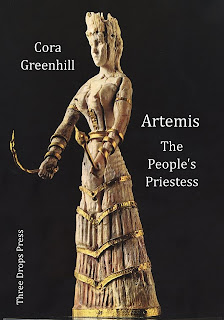 I call it a myth-interpretation - or a performance piece in verse, based on the mythical twins, Artemis and Apollo.


The Greek Goddess Artemis - whom the Romans called Diana - is mythology's arch-outsider - lesbian feminist, environmental activist, radical midwife, shaman huntress, man-slayer when necessary, and like her tragic namesake, called the People's Priestess. Her twin brother Apollo, despite his extravagant juvenile delinquency, was elevated to be God of civilisation, harmony, proportion, and music.

"Greenhill applies the mind of a scholar, the ear of a poet, and the eye of a painter to create a fascinating allegory that explores the conflict between patriarchy and matriarchy as expressed in the sibling rivalry between twins Artemis and Apollo. An amazing achievement."

"Cora Greenhill's verse drama begins on the day of the cataclysmic volcanic eruption which irreparably changes the ancient island of Crete and its inhabitants... a sensuous and heady brew of jealousies, same-sex passions,  hints of incest and rites of passage. Modern day reference and vernacular with a liberal scattering of humour ensure it is both accessible and captivating from start to finish."

Geraldine Monk, poet
"Artemis: The People’s Priestess pulses with light, heat and movement. The collection tells the ‘back story’ of Artemis ... through a series of dramatic poems spoken by different characters. Like Tony Harrison’s translations of Greek Comedy, it restores the physicality and vibrancy of the original Greek myths, incorporating dance, rhythm and humour. This is a wonderful collection, and left me with the fire of Artemis in my belly."

Rachel Bower, poet
Posted by Cora Greenhill at 6:20 AM No comments: