Invitation to launch of Far from Kind 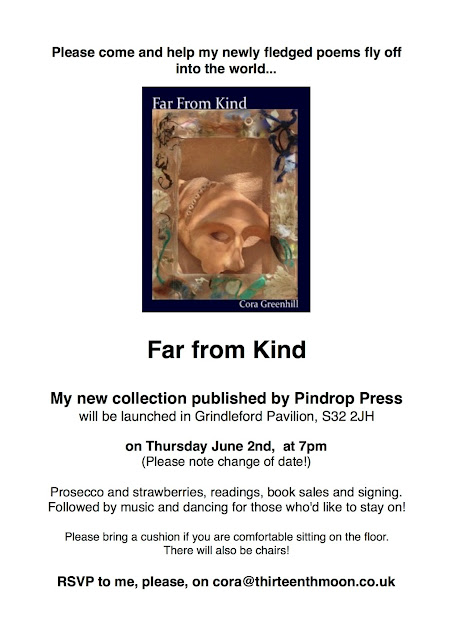 Posted by Cora Greenhill at 2:29 PM No comments:

The striking picture on the front of Cora Greenhill's new book is of a collage of her own work - a frame containing debris from the sea - plastic and nylon rope mixed with fragments of seaweed. Inside a fractured mask of Aprodite, symbolising the broken Greek Goddess in the refuse of today's oceans. The dark yet beautiful image sets up some of the themes of the poetry in Far from Kind: sensual, darkly beautiful, suggestive of the precarious edge on which humanity teeters.

The title, Far from Kind, is a phrase taken from the poem In our own Hands, about touch: how we need to learn to be in touch again, deeply and naturally, with each other, and crucially with other species. The poem is triggered by an intimate encounter with an aging baboon, who 'rested her slim palm, cobweb-soft, in mine,' and reflects on how far we've travelled from when our earliest ancestors made the first human footprints in the mud of Africa. Other poems take the reader back to the roots of human ways of thinking and acting. The sonnet, Aquatic Ape, pictures the lives of the earliest humans who gradually migrated along the coasts of Africa, making the radical suggestion that 'Free of the need to hunt to survive/and before labour was invented, ... Holiday was the spur of evolution.' Another poem is in the cynical voice of a woolly mammoth in The Natural History Museum, and another in the voice of the ancient Mesopotamian river God, Enki, despairing of modern politics and hunkering down in his muddy domain.

But Far from Kind is as personal as it is universal, with many poems in a more confessional tradition which also explore unflinchingly human unkindness, whether due to a conditioned fear of another species 'a pretty slip of a thing/purest green serpentine' which causes a snake's unnecessary death in Endangered; or the callous feelings of a liberated young woman towards a lover she's finished with, 'your hunger, so recently/my horn of plenty, just looked like poverty'; or an African philandering professor who assumes FGM to be the norm.

Though the author is a lifelong feminist, the exploration of human frailty and sometimes cruelty in this collection is equally critical and compassionate towards men and women, and all held within an overriding tenderness towards the living world of which we are only a part, with a passionate hope that we can learn from and for the children:

Let her throw socks! we laugh.
Grow those throwing muscles!
Make free with your world
as old gods hurled thunderbolts
when they were gay as Picasso
shaping the elastic stuff of life
like play-dough in their hands,
amazed what they could do.

(Hannah's First Birthday)
Posted by Cora Greenhill at 12:50 AM No comments:

Endorsements for Far from Kind

Here are the lovely comments on the back of Far from Kind!

'Tender without being sentimental, these are poems that attend carefully to the details that make our world rich: 'the orchard...flooded with light', the 'muscled back' of a great river, an off-key singer who makes the audience dance anyway. Poems that look for the places where 'a day can put you down', or the way life can leave you 'suspended in strangeness'. Every poem is so rich and absorbing. Savour them.'

By Noel Williams, poet, reviewer, and editor for Orbis and Antiphon. Author of Breath.

'The strongest moments here are Janus-faced. As the poet glories in colour, the palettes of love, sensory delight, mystery, compassion, she sees their shadow: the appetite, a sneering inhumanity, decay, death. The ecstasies of love are found in a ditch. Her poems reach to the light but are rooted in dark earth, with a lyricism that can veer easily into sensuous violence. Her luxuriance in succulent nature spits fragments of grit and blood. She finds anthropological joy in a beggar and thief. In poem after poem she dips into 'the river beneath the river...between tough weeds and broken glass.'

'Cora Greenhill, whose strong, witty voice I have always liked, took me on a tour of foreign parts in this excellent new collection. Hers is ‘a voice far from home/melting us like butter.' Her endings are often to die for and there isn’t a weak poem in this book. Whether writing of a neighbour in Crete whose sick wife has ‘smoked haddock skin’; longing to ‘spray paint Wonderbra ads again’; or capturing a thrush, a frog, a much-loved tree given a death sentence, her writing is razor sharp and always engaging.'

By Wendy Klein, prizewinning poet, reviewer, author of Anything in Turquoise, Mood Indigo.

'In this wide-ranging new collection, this poet speaks out in many voices (a heron, a mammoth, the earth itself), for the planet and humankind. Dance is a metaphor that inhabits it. A single mother turns her frustration over a toddler’s tantrum into a dance, ‘The Tarantella’; and even stoats dance! Indeed, the poems themselves break through words into a dance of life:  ‘Feet  hips  hands / unable not to dance,’ in Zanzibar. In a fine sonnet reflecting on Elaine Morgan’s famous aquatic theory of evolution, the poet leaves the ‘aquatic apes’ on the brink of dancing into a whole new stage of existence.'

Cora Greenhill grew up in rural Ulster, mostly outdoors, escaping the turbulence of family life. She has lived in The Peak District for nearly 30 years. She studied literature at Warwick University, most memorably with tutor Germaine Greer, a lifelong inspiration. She's had a long and varied teaching career, the high point of which came early, at The Universtiy of Nigeria just after the Biafran War. She moved to Sheffield and became freelance in the heady days of liberal Adult Education. In the same year she met her partner whom she married eleven years later, on a shared journey exploring feminism, the Goddess, Crete, 5Rhythm dancework, African music, and poetry. Their son and grand daughter live in New Jersey. Cora self-published two collections and was widely published before The Point of Waking came out with Oversteps Books in 2013. She hosts Writers in The Bath, the premier poetry reading venue in Sheffield!

Posted by Cora Greenhill at 12:27 AM No comments:

Thrilled that my poem A Hum (see below) has been put forward for The Forward Prize by Artemis poetry! Yeah!
Posted by Cora Greenhill at 5:04 AM 1 comment:

This poem was written very spontaneously from the simple prompt of 'neglect' as a theme. I've long been interested in the fine line between freedom and neglect in the context of childhood, as well as in the sense of the natural environment as being innately nurturing.

Neglect your child. Set her free to find home
in bogs brash with marigolds, cuckoo flowers,
harebells in heather.

Lay no tables. She’ll know
to slip a hand under the maran’s downy breast
for warm eggs; learn to make fire,

Or she’ll slink to cottages
where embers wink
under black-bellied pots of purties:

a sprinkle of salt, a cup of blue milk
with a wrinkle of cream from the churn.
A curl of new kittens to hold.

She’ll mount an old donkey with fostered boys
split skin in a fall, let them laugh,
spit on grazed hands.

When navy serge stiffens with first blood
she’ll know the stale smell of herself - her shame
and knuckles blistered scrubbing stains.

But alone she’ll find her own wild cries,
hidden in hay bales and on branches rising
to open skies. She never was yours.

She’ll hitch-hike to Istanbul
sleep under new arrangements of stars
with the half moon lying back.

She’ll not know where a day
will put her down, may learn to trust
the mysterious kindness of strangers.

Posted by Cora Greenhill at 8:37 AM 2 comments:

Endangered: published in The North 2015

... in the circumstances
in the situation of the hotel pool
the children playing on the edge ...

though I am also enchanted
and in the lightning moment
think it is the harmless kind
that lives under rafters, not
the green mamba ... but I know
(I still see a thin loop of him now,
in the shade of the mattress)
that I will not lie on a bed
with a slinky young snake beside me, so
with a look to the woman serving drinks,
I betray him. The Masai!
she shrills, as her tray sways
and steadies, and the Masai guard
is here with nagual speed, dapper
in red wraps, bone anklets, machete erect.
I won't look to where excited children gather
around the limp thing in his hand.
Posted by Cora Greenhill at 8:24 AM No comments: